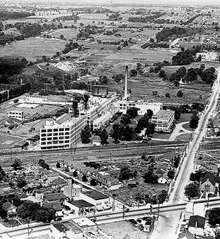 A community in profile: Weston-Mount Dennis

Weston-Mount Dennis started off like many other Toronto outer neighbourhoods.

The suburb was anchored at the turn of the 19th century by a boatyard on the Humber River, while gravel and clay pits, interspersed with orchards, made for a sparsely populated rural setting.

That was until Kodak Canada arrived during World War I.

Industrial development was triggered by the arrival of the photography giant, which set up its factory on Eglinton Avenue and Weston Road, right beside the railway corridor.

The community prospered as almost all employment was pegged to this one factory complex often referred to as Kodak Heights. Workers at Kodak and the nearby stockyards built homes, gradually filling the streets with the current housing stock of cottages and small, fully detached homes. These middle class dwellings became the most affordable housing in Toronto for both new immigrants and first-time homeowners.

Then in 2005 Kodak packed up and left, as did many associated jobs.