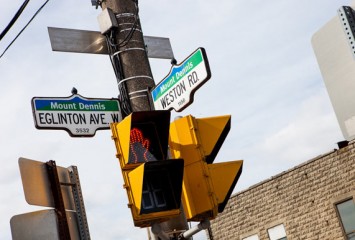 A possible Kodak moment: Our visit to Mount Dennis finds a storied community at a crossroads

Mount Dennis has always been working class, and in a city that’s becoming increasingly gentrified in one way or another, from the Junction to Long Branch, and Ossington to darkest Leslieville, that makes Mount Dennis something special.

There have been factories in Mount Dennis, whose main commercial strip runs along Weston Road roughly between Eglinton and Jane, for decades. The biggest of them was Kodak (which helped define the look and feel of the neighbourhood, building 2,500 homes for workers during its century there). The Kodak plant is the one people outside the neighbourhood sometimes know about, the one whose closure in 2005 led to predictions of disaster. But there were others before: Continental Can, Double D electrical, Johnson Matthew and Jack Greedy excavating, to name a few. Irving Tissue, formerly the Royale Tissue plant, is still there, just north of Jane, a reminder of the sort of industrial landscape butted right up against the residential neighbourhoods where many of the workers lived that used to define Mount Dennis. These days, with the factories mostly gone the place can seem like a margin without a centre. But only if you don’t look too closely.

Like the Dupont strip, another example of the now mostly extinct breed of urban industrial neighbourhoods, Mount Dennis has to find some new direction. Dupont’s future is being subsumed into the Annex, with bakeries and cafés opening where peanut factories and type foundries used to be. But there’s no Annex near Mount Dennis. The Junction’s not that far south, but it’s only just getting on its feet itself after walking the wilderness of its own post-railway career and has no aegis yet to spare.

But disaster? It depends how you define the word. It’s a neighbourhood with history, much of its still in evidence, but one that’s moving away from its roots and has yet to find much fertile ground. New plans from Metrolinx for the Kodak lands, a potential LRT stop and nearby developments are may redefine Mount Dennis place in Toronto for the better.

There are vacant storefronts. One of the more popular spots is the Coffee Time at Weston and Ray Avenue, where sandwiches and meat patties seem to outsell doughnuts. The outlet has a bank of four computers with Internet access for $1 for 30 minutes, $1.50 for an hour. On my three visits, they were well used. The low-rent housing on the northeast side of the diagonal strip, much of it just behind Coffee Time, houses a local population whose diversity is defined not only by race but by class.

According to 2006 Statistics Canada numbers, the number of visible minorities and recent immigrants are higher in Mount Dennis than much of the rest of this diverse city. So is the number of homes where neither English nor French is the primary language. Spanish is the top non-official language in the area, some of it Latin American, some of it Caribbean, which is well ahead of runners up Portuguese, Vietnamese, Somali and Korean.

From 2001 to 2006, Africans topped the list of recent immigrants to Mount Dennis, followed by Europe, Caribbean and Bermuda, South America and Southern Asia. But the neighbourhood has been reshaped by every wave of immigrants that Toronto has experienced, with Europeans making up the largest ethnic group (3,615), followed by Caribbean (2,295), African (1,980) and East and Southeast Asian (1,835). Compared to the rest of Toronto, the number of renters and single-parent families is much higher, as is the number of dwellings requiring major repairs. Incidents of low income increased between 2001 and 2006, with 29.7 percent of economic families, 48.2 percent of individuals and 31.7 percent of private households being considered to be low income. Grouped by income levels, the largest cohort is the $30,000-$39,000, but the second largest group earns less than $10,000. So it makes sense that the neighbourhood is one of Toronto’spriority areas, calling for greater investment in city services.