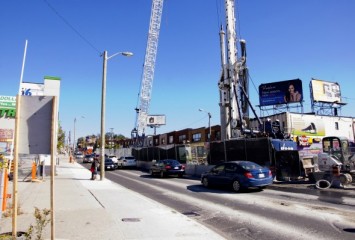 So, let’s pause here to offer a big shout-out to former mayor David Miller, whoseTransit City campaign circa 2006-2007 resurrected a long and shamefully delayed effort to bring rapid transit to Eglinton; a second shout-out to former TTC chair Karen Stintz, who defended the Crosstown against Rob Ford’s attacks; and a third one to the pre-gas plant McGuinty Liberals, who ponied up the dollars.

But this massive contract is good news for another reason: according to a community benefit agreement (CBA) appended to the Metrolinx RFP last spring, the successful bidder – as well as those ultimately chosen to build the Finch West and Sheppard East LRTs — will be expected to hire from a pool of workers who come from some of the city’s most marginalized communities and have received training through apprenticeship programs delivered by the building trades unions.

Within six months of winning the contract, according to the framework agreement, the winning consortia must submit a hiring and recruitment plan to Metrolinx that passes muster with the agency’s CBA goals.

“Metrolinx recognizes that major infrastructure projects like Crosstown should also include additional benefits for the communities in which we work; including employment, training, apprenticeship, local supplier and social procurement opportunities, where possible,” says spokesperson Anne Marie Aikins. “We believe these types of strategies support the delivery of large infrastructure projects and don’t interfere on-time or on-budget performance.”

It’s a big deal, because we will be able to see, on a large scale, the impact of institutionalizing a connection that should have been incredibly obvious to politicians and policy-makers of all ideological stripes – that governments can and should leverage the huge sums spent on infrastructure to help un- or under-employed people move into stable jobs.

President Franklin Delano Roosevelt and indeed many Depression-era leaders understood how to use public works to get the unemployed back into the workforce. In our own era, as I reported in this space last year, many U.S. city-regions have incorporated CBAs into the way they deliver large construction projects. But apart from the local employment conditions baked into the Regent Park revitalization [PDF], Toronto has been a CBA-free zone.