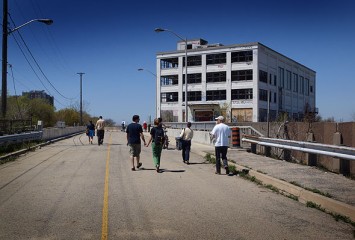 The past and the future of Mount Dennis

Last weekend’s Jane’s Walk featured many worthy destinations, but I was compelled to join the walk in Mount Dennis, focused on the Eglinton LRT line that will have its west end terminus there, once the two massive tunnel boring machines being built there finally emerge at the eastern end of this massive – and long overdue – project. It’s also the neighbourhood where I grew up, my family’s home since before World War One, and an area whose decline had almost become terminal.

Unless you grew up there, most people don’t know where Mount Dennis is, and once upon a time I would have explained by saying “near Weston Road and Eglinton – by the Kodak plant.” Kodak closed its Toronto plant in 2005, after over 80 years of operation on the site, but telling people where Mount Dennis is will get easier when Metrolinx finishes the first phase of its crosstown Eglinton LRT in 2020 (we hope.) In the meantime there’s a lot of work to be done, a lot of people who want to see things done right, and an awfully big hole in the ground just across Black Creek from where Kodak used to stand.